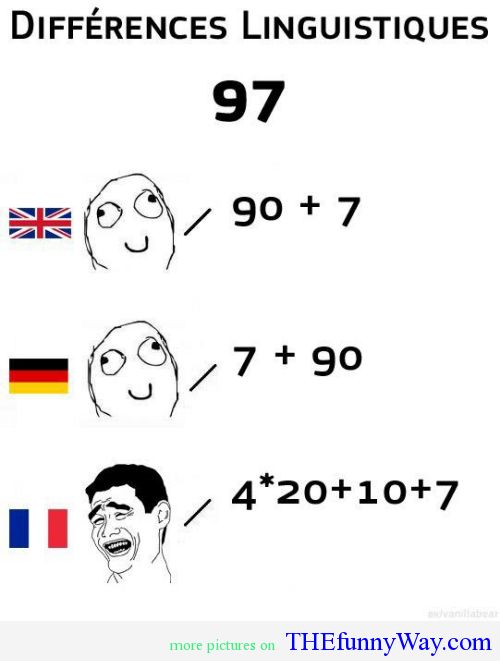 I thought I had the French numbering system worked out.

I’m currently working in a travel and tourism office in France.

I am now thinking of having a t-shirt printed with the legend ‘YOU CAN’T SCARE ME, PART OF MY JOB INVOLVES ME ASKING FRENCH PEOPLE FOR THEIR POSTCODES’

In case you are unfamiliar with the French postcode system, and are wondering what this sounds like I will use 94440 as an example. They will start with the ninety-four, this will then be followed by the four-hundred, they will then finish with the forty.

It looks easy when I type it like that, doesn’t it?

Now imagine that being delivered at a speed slightly faster than that of a bullet exiting a gun. Then throw in thick regional accents, beards, mumbling, sandwiches, pipes and dogs excitedly yapping while you try to decipher what has just been said to you.

I love it when people from Belgium come in. Because then when I ask them for their postcode, they simply say ‘Belgium’ and then I can just go on the computer and click on the box that says ‘Belgium”. Except it’s in French so it says ‘Belgique’.

I think it’s the best way to hammer home the numbers. You just need to make sure you’ve got some painkillers handy when you finish your shift – for your headache.

And the French are lovely. If I’m ever slightly dubious of what they’ve just said, I’ll hold up my little pad and ask them if it’s right. If it’s wrong they’ll correct me. And if it’s right they’ll look at me with a slightly fond look, as if they want to pat my head.

Or give me a sweet.

Yes, pretty much exactly like you would with a dog that’s just learned a new trick.

Another part of my job involves me taking their email addresses down via the telephone. I’ve mastered that fine art with relative ease – I pass the phone to my French colleagues.

6 thoughts on “Fun With Numbers…”