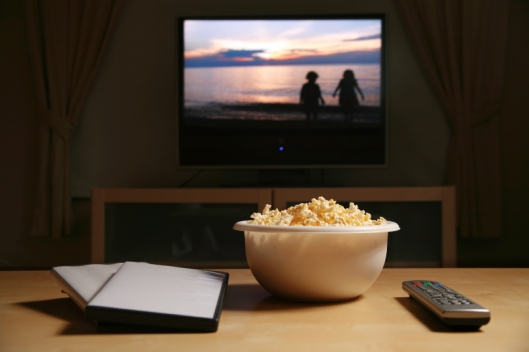 The following is an example of my daughter’s dialogue, spoken over the first ten minutes of pretty much any film that you could think of, that is suitable for children aged four. It doesn’t matter what genre it is, it will always follow the same pattern…

‘Why are they doing that?’

‘Where has she gone?’

‘I have not already had some’

‘Are they the goodies?’

‘Why did he break that?’

‘Can I have some more chocolate?’

‘Can I have some more chocolate?’

‘Does the baddy want that?

‘I want a cuddle’

‘Are they the goodies?’

‘Does the baddy want that?’

‘They are the goodies aren’t they?’

‘They are strong aren’t they?’

‘And you need a shave’

Went to see my first film in a French cinema today – no subtitles, all in French.

It was a harrowing tale of an illegal immigrant who has made his way to England, and settled in with a family, only to have his life turned upside-down when he is wrongfully accused of burglary.

The film then follows his life as it further deteriorates after he is imprisoned.

All hope is not lost though and, with the help of his heretofore under-utilised culinary skills, he manages to charm the other prisoners, and is accepted as one of them, despite his strange mannerisms and foreign ways.

The community where he used to live is seen to fall apart without him, as he is clearly shown to be the ‘glue’ that held it all together.

I won’t spoil any more of the film, or the ending for you, but will just say that Paddington 2 is very, very good. 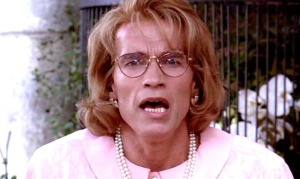 I don’t know why I started doing this, but they’re laughing their heads off and it would be a shame to stop now.

We’re at the local park, the one with two swings, a bench and nothing else. This is the lesser of two parks in my village, the other one has climbing frames, slides, carousels…you name it, the other park has it. There’s clearly a disparity in the allocation of fun, maybe there were some midnight-thefts, or maybe someone with an eye on having the best park slept with the right person to ensure their park came out on top. I don’t know, but that’s the way it is.

We don’t mind though. The swings are ideal, one is for bigger kids – my son – and the other is designed for toddlers – my daughter. It’s great as I can push them at the same time, they have fun and I can see how far I can swing them before they start doing that ominous wobbling thing that all swings do, when they are reaching dangerous altitudes.

As I swing them I just happen to say, in a strong Austrian accent ‘I am the Swinginator’.

My lad loves this and immediately starts laughing, as does his sister. ‘Again daddy, again’ He cries. I oblige with ‘My mission is…to swing you’. They laugh and clearly want more, but I really can’t think of any more swing-related phrases and so lapse into actual lines from The Terminator franchise to appease them. This really gets them laughing.

‘Skynet becomes self-aware, and launches nuclear missiles at targets in Russia, knowing that the counter strike will take out its targets here in America’ more laughter follows.

‘The man most directly responsible for Skynet’s creation is Miles Bennet Dyson’ both kids are red in the face with glee.

‘Mimetic Polyalloy, whatever it touches it becomes…it cannot form items that contain complex moving parts,but it can form knives and stabbing weapons’ I start to worry that my son will wet himself, he’s laughing that hard.

As I’m pushing them, trying to think up more Schwarzenegger pearls, I wonder why I started coming out with this robot-themed narration.

I watched Terminator Genisys at the weekend, so that must be it.

I didn’t understand it.

There were robots coming from the future, the past and the possible-future. Arnold was in it, but he was old.

Also someone sent Arnold back to before all the other Terminator films, but nobody explained that part.

And the Golden Gate Bridge had an action scene on it, in what must now be a pre-requisite of action films.

Back to the swings and the kids are still in gales of laughter, but I’m running on empty with Terminator-talk.

I know, let’s switch to that other kiddie-favourite: Darth Vader.

‘You are part of a rebel-alliance, and you will give me the information I need’ I say, channelling James Earl Jones so well it’s scary. The kids crack up.

‘I changed our deal, pray I do not change it further’ and ‘Obi Wan has taught you well’ are both met with similar levels of amusement.

At this point my son decides to lift up his feet and squat on his swing, he looks a bit precarious to me. ‘I’m doing it like Spiderman daddy’ he says ‘Are you safe?’ I ask him. This makes me consider doing a Laurence Olivier ‘Is it safe?’ impersonation from Marathon Man.

I decide against it though, and we leave the park having exhausted our inappropriate banter.

Well, for today at least. 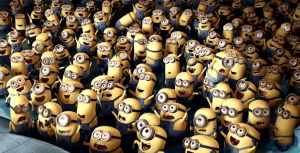 A sunny Saturday sees me, the laddo and his sister heading off to our local gala, a popular yearly event. I’m flying solo this weekend, the missus having wisely arranged for one of her friends to get married, so she can escape, and enjoy a weekend of wine and dancing, leaving me in charge of our terrible twosome.

As we head into the field, next to our local sports club where the gala is taking place, my son immediately spots the bouncy castle. ‘Want to go on the bouncy castle daddy’ he tells me. We approach it and this morphs into ‘Want to go on the bouncy slide daddy’, because right next to the castle there is indeed an inflatable slide. I pay the guy, two pounds for five minutes, and put the laddo in ‘the pen’ an area reserved for kids to wait in after they’ve coughed up the moolah, but before the previous set of kids’ five minutes of fun have elapsed.

I say fun but it looks like gladiator school from my perspective. Aren’t kids rough? There’s a dog-eat-dog mentality to them that really comes to the fore when fun rides are involved. So I watch as little Sally with the cute pigtails and freckles ruthlessly mows down the 2 year-old in front of her, who has had the audacity to dawdle slightly on her way to the top of the slide. But that’s nothing compared to the shenanigans on the slide itself. Kids hurtle down it with utter abandon for themselves or others, there are numerous near misses and at least one kid has a collision that may spell the end for his expensive looking specs. There’s a man with a 4×4 lurking nearby, I think he’s there so that he can help inflatable-slide guy make a quick getaway if the kids’ violence spills over into a full-blown riot.

I’m beginning to suspect that this was a bad move, but I’ve paid my two pounds, and I don’t think they give refunds. The current batch finish their tour of duty and then it’s my son’s turn. ‘I love you’ I whisper to him as he heads off into an uncertain future. But it’s all OK. I think the footage they’ve just witnessed has scared the newcomers into actually watching what they are doing, and so everything goes to plan. No kids were harmed during the operation of this slide, and all that.
Following a few more – blessedly sedate – rides, and after spending a small fortune on the tombola – yes! I always wanted a (no-longer-accurate) 1D Cat Cushion (We don’t have a cat), it’s onto the hook-a-duck stall.

This is where I notice something on the stall. Minions. Lots of them. In a variety of costumes, with different assortments of eyes, and, yes there’s even a purple one. Then I look around at the rest of the gala, they’re everywhere! On every stand, every ride, swinging from almost every kid’s hand are these freakishly-eyed, Tic-Tac-shaped, yellow monstrosities. There’s even a family-based contest here to round off the day at 4.30pm, and the prize? A Minion the size of a small elephant wearing, for some reason, a Biggles-era flying jacket.

This is the second week in a row that I’ve had to endure – sorry I mean enjoy – taking the kids to a gala, and it was the same then. The minions outnumbered the actual people in attendance by a ratio of approximately 4-1. A couple of London-wideboys were doing a brisk trade running a numbers game on one stall. Get 21 in three tickets to win a minion ‘He’s wahn anaver one ovah heeeah’ said cockney #1. ‘Anaver wahn?’ said cockney #2 ‘We mast be mahd, weah giving ‘em away’. I ponied up my two pounds (why is everything at a gala priced at £2?) and promptly scored 42. The disappointment in my son’s eyes haunted me for seconds.

So I’ve got this in mind as I attempt, again, to win one of these mass-produced boggle-eyed pieces of tat for my son.  You can actually buy them outright I discover, so I dicker with the stall holder for a moment over the pricing structure. I don’t go beyond the ‘medium’ (roughly the size of a small baby’s hand) which is £5.
I ask my son if he will be happy with the default Minion-related prize if he (highly likely) doesn’t hook the duck with the best number on it. The default Minion prize is a (small child’s) thumb-sized cushion on a key-ring (why? Why would you need a cushion on a key-ring? In case The Borrowers run out of haberdashery?), he casts his eyes down, lowers his head and makes unhappy noises. I think this helps his chances as, after paying the standard £2 fare, we are shortly heading away with our very own – purple – Minion.

I get us out of there sharpish after that, keenly aware that my daughter is now looking, with some interest, at the other Minion-filled stalls. But mainly because the air-raid siren near the inflatable slide has gone off – someone’s thrown a Minion on the slide, and it’s turned nasty.